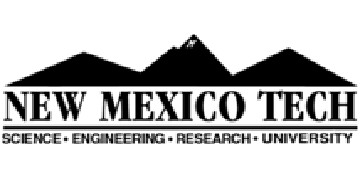 The Hydrology Program at New Mexico Tech is recruiting graduate students at the MS and PhD levels for a broad range of research topics. Applications for positions starting in Fall semester 2022 are due January 15, 2022. Information on how to apply can be found at www.nmt.edu/gradstudies/admissions.php. If you are interested in specific projects listed below, please reach out to the indicated research advisor. Projects: (1) Agricultural soil and groundwater management during land use change in Eastern New Mexico (advisor: Michael Schaefer); (2) Multiphysics experiments supporting novel CO2 sequestration methods (advisor: Alex Rinehart); (3) Resilience of headwater watersheds to climate change and disturbance (e.g., wildfire), with implications for downstream communities (advisor: Daniel Cadol); (4) Geothermal greenhouse/Coastal Hydrogeology (advisor: Mark Person); (5)  Hydrologic modeling of mountain headwater contamination (advisor: Kate Leary).

New Mexico Tech is located along the Rio Grande valley in Socorro, NM, with abundant outdoor recreation opportunities for hiking, sport climbing, mountain and road biking, birdwatching, and camping. The small-town atmosphere promotes a tight-knit graduate student community, while the amenities of Albuquerque, including a well-connected airport, are only a 1-hour drive away.

New Mexico Tech's Department of Earth and Environmental Science offers BS, MS, and PhD degrees in a broad range of earth sciences. The department incorporates five strongly interacting graduate programs-- Geology, Geochemistry, Geophysics, Hydrology, and Geobiology -- in association with an integrated undergraduate major in Earth Science featuring options in Environmental Geology, Geochemistry, Geology, Geophysics, and Hydrology. The department also administers a cross-department undergraduate degree in Environmental Science. The department has 20 faculty members, of which six are in geophysics, four in hydrology, and ten in geology and geochemistry. In addition, the department has 30 affiliated research and adjunct faculty who are actively involved in research and/or teaching. Many of these are from the New Mexico Bureau of Geology and Mineral Resources, which is located on campus, but they also come from industry, national laboratories, and other organizations. The IRIS PASSCAL Instrument Center and EarthScope USArray Array Operations Facility, two major NSF-funded seismological facilities, are also housed on campus and administered by faculty of the geophysics program.
Find Us